Joyce is a theater director, acting teacher, producer, playwright with the goal of developing talent in others and bringing joy. She shares her most recent efforts to support a positive community on the latest Stories Worth Telling with the Steels to host and producer Catherine (Cate) Steel. 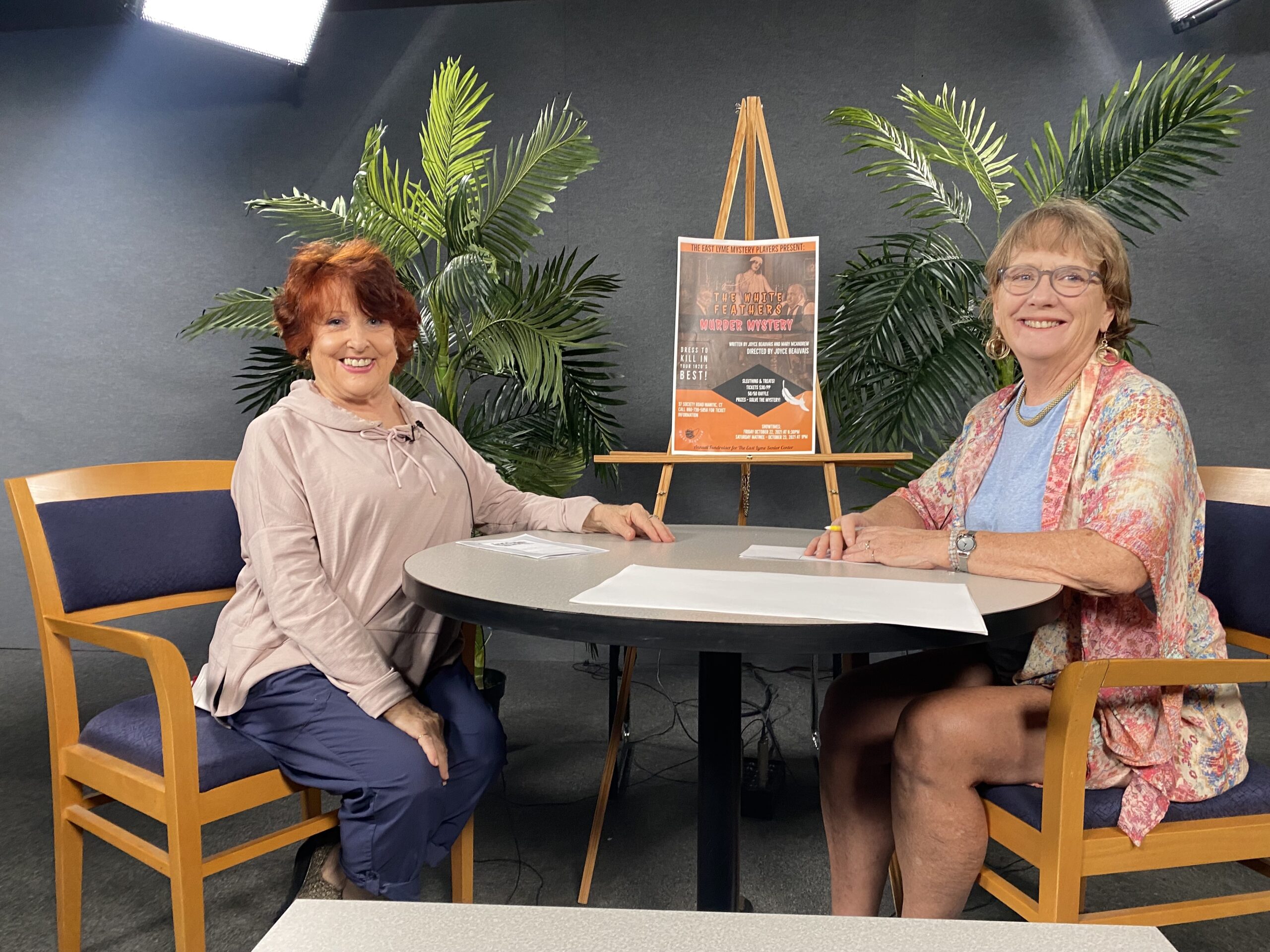 Shoreline Drama is an umbrella for the Theater for the Community that she creates.  This past summer, the community celebrated with Joyce and company, her Theater Under the Shell, a live stage production every summer as a pop up summer stock theater in the Niantic/McCooks Park Bandshell. In December, Beauvais will partner with Bayside Main Street and Niantic Main Street to present their second annual Carol Sing on the lawn of Bayside – for all the community to gather and sing! There will be holiday characters merrily sprinkled throughout the carolers. Joyce is costumed as “Mrs. Claus” as she plays her on the Essex Steam Train North Pole Express every Holiday Season. Beauvais has done and continues to do a lot of different things in the community over the years.

What about right now?

Joyce co-wrote with Mary McAndrew and is directing the production of  The White Feathers Murder Mystery. Actors from all over this area and this town are supporting and involved to make it a success. Live theater is all about the audience — particularly in this intriguing murder mystery! The Show will be performed in the East Lyme Community Center.

“It’s not only a fun activity, it’s a fundraiser,” said host Cate Steel. The programs that the Senior Center supports are for hiking groups, knitting groups, cooking, acting, ping pong, trips, luncheons, Meals on Wheels and countless other activities for seniors. Joyce also teams up with the Senior Center director, Cathy Wilson, for the shows at McCook’s Point at Theater Under the Shell (TUTS).

The East Lyme Senior Center was a lifeline for countless seniors during the COVID pandemic and continues to be so.

860-739-5859 is the number to the Senior Center in East Lyme where you can buy tickets, and there is limited seating so please reserve early and meet the characters on the Red Carpet and dress, for fun, in your flapper and dapper finery for this 1920’s Prohibition Murder Mystery.

The show starts in less than a week on Friday, October 22.

The show opens on Friday night at 6:30. In the past, they did murder mysteries with a dinner for safety, not this year.  However dessert and coffee will be served. Prizes for the table(s) that solve the mystery and a fun 50/50 raffle. People should be able to be out by 8:15 when they can plan a later dinner or have dinner ahead of time in these unique circumstances.

Longer Lasting Impact in the Community

There’s a beautiful space on a building on Main Street owned by Gary Smith, Bayside on Main — where Joyce hopes to have a theater classroom space, rehearsal space, and do workshops there in East Lyme/ Niantic. They plan to name it Bayside Theater Arts Studio.

The landlord loves the idea, but needs some support from financial backing or through the American Rescue Act from COVID; the community and arts help drive positive community and an area to express creativity and positive health together.

Without revealing too much, Joyce tells the story of the fighting between the Irish and the Italian gangs fighting for Speakeasy supremacy in New York City’s Hell’s Kitchen on 10th Avenue – known in those day as Death Avenue! Somewhere along the line, something happens. And the audience has to figure out who is the culprit .

Each table is an active participant; tables get to vote and question. An audience member will be called on stage to join in the zaniness!

Actors have been rehearsing in masks the entire time, and ahead of the show they will take a COVID test. Pending all negative results, the actors will perform without a mask.

“They always say follow the money and you uncover the mystery,” posed a question by Cate Steel.

Joyce said we will have to wait and see.

There are a few suggested questions at the table, but it’s just a suggestion to spark some creativity and ideas.

Then each table gets a ballot and gets to decide who the person is to solve the mystery.

A forensic doctor from the audience will come in and read the results of the autopsy.

Whichever table(s) has the right answer will win a prize.

“Everyone will have a little skin in the game, which makes it more exciting,” said Steel.

Ways to develop new skills and acting is Joyce’s passion. One thing Joyce suggests her students to do is go out into the community and do a character study of an unknown victim.

It’s called a character observation study– without good listening skills one can’t be a good actor.

“Observation, listening and articulation are the three skills required to hone in,” Steel summarized.

“Once they write down every detail they can see, they round out the character by adding something onto their life through observation,” explained Beauvais.

A scene never starts at the beginning and ends at the end, she explains. And through the workshop, they can see the difference or subtext, breaking down the beats, and all the work that goes into being an actor.

She teaches all levels; including those who want to read or some who want to memorize. They rehearse it over and over again so that it improves during the time. The full theater production is memorized, but in the Senior Center and other classes she doesn’t want to put too much pressure.

“Theater was good for the introvert and extrovert,” is what Steel’s mother always explained, who spent decades teaching theater and drama.

Outside of theater, Joyce Beauvais is very introverted and on her own often.

“We sort of learn the character we’re planning, and drop them into ourselves,” Beauvais explains.

Beauvais started as a child actor in Boston, College – The Boston Conservatory of Music, and decades as a Union actor in NYC. She has performed in over 200 productions on stage in NY and all over the country. She has acted in Film, TV and Commercials. She produced on and Off Broadway and Directed several productions in her New York career. She was the owner with uber producer/manager partner, Jack Rollins (of CT) in running for five years, Chez Beauvais Restaurant and Cabaret, featuring fine dining and the best that Jazz entertainment had to offer. Big names on the stage and in the audience.  Let it be known, that Joyce has fallen in love with her town of East Lyme/Niantic and feels like living on Niantic Main Street offers the best of all worlds just a few steps in any direction.  But Main Street would be richer yet, by having a Theater Arts Studio on one of its’ corners!